“Up, civil unrest!” (an Easter-ish reflection)

Posted on April 1, 2021 by TheEvangelicalLiberal

You may have come across the popular Easter-themed worship song “O Praise The Name (Anástasis)”. I like the song, but I’m amused that someone felt the need to add that biblical Greek subtitle. For those like me not fluent in biblical Greek, ‘Anástasis’ means ‘resurrection’… or also apparently ‘standing up’, ‘removal’, or sometimes recovery from a debilitating condition. Well, I guess death is fairly debilitating.

However, when a friend studying Classics first encountered the song, her response was ‘Why have they called it “Up, civil unrest!”?’

This novel translation arose from splitting the word into ‘ana’ (‘up’ / ‘again’) and ‘stasis’, which surprisingly in Ancient Greece referred to periods of civil war. Sadly this delightful etymology isn’t correct – the actual derivation is from anístēmi, ‘rise up’. But I think ‘Up, civil unrest!’ does, albeit accidentally, capture something important about the resurrection and about the whole of Jesus’ mission. And I’m always up for a bit of accidental prophetic wordplay (see earlier posts on ‘The Ebola crisis or the abode of Christ’ and ‘Jesus is Charlie’). 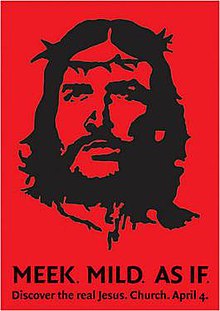 I don’t of course mean that Jesus was a 1st-century Che Guevara, though I do still like this image (right).

The gospels are at pains to show that Jesus consciously eschewed the violent revolutionary methods and goals of his contemporaries the Zealots; that he stopped his followers from using violence to fight back against his captors in Gethsemane; and that he consistently resisted calls to forcibly re-establish an earthly kingdom of Israel. (Something that some current right-wing Christians might do well to remember.)

However, I do think it’s fair to say that Jesus had a pretty uncomfortable relationship with authority, both political and religious.

He did of course come out with those startling lines “I have not come to bring peace, but a sword [or division]” (Matt 10:34), as well as that variously-translated and hard-to-understand phrase from Matthew 11:12 about violent men entering the kingdom of heaven by force.

More significantly he committed some fairly provocative, subversive, even seditious acts. Perhaps the closest Jesus came to open revolution was riding into Jerusalem as ‘king’ on Palm Sunday (albeit in peace on a humble donkey), and then using physical force to turn the money-changers out of the temple. Both of these were of course highly symbolically-charged and prophetic acts with multiple meanings; almost enacted parables. They were more than mere civil disobedience – but surely not less. You could certainly argue that his action in the temple courts wasn’t a million miles away from BLM protesters tearing down statues of slave traders – wherever you stand on that debate, it’s worth pondering the parallels with Jesus’ actions.

Some have suggested that one of the chief aims of Jesus’s ‘cleansing of the temple’ was to provoke the authorities into arresting and ultimately executing him in fulfilment of his greater mission. He wasn’t starting an armed rebellion to overthrow his people’s ungodly oppressors (to the disappointment of many of his followers). He was apparently offering himself up as martyr in an even greater cause, to establish something far greater and better than a political kingdom or empire… but one that nonetheless did still challenge and threaten the political empires, kingdoms and rulers of his day and of ours.

Jesus was and is a revolutionary – but in a completely new and unexpected mould, unlike almost any other revolutionary we’ve seen (maybe with the exception of people like Rosa Parks, MLK and Gandhi who were all arguably following the pattern Jesus set).

And perhaps Jesus’s most shocking and subversive acts of all were his incarnation in a human body (which I’ve argued elsewhere is so shocking as to be almost blasphemous); his death (God or the Messiah dying – unthinkable!), and his resurrection. The resurrection of Jesus is literally an uprising. It’s a rebellion against death itself, against entropy and the natural order of things – the universal powers-that-be.

God on whose side?

In the western world at least, where the church has often allied itself with the political or royal establishment, there’s often been a view that God is on the side of the powers-that-be, the conservatives, the proponents of law and order and of the nuclear family. However, this view tends to be less prevalent where Christians are a persecuted minority, or among disenfranchised groups who know the ruling establishment will never represent them. In such places, more revolutionary ideas like Liberation Theology tend to spring up, allying Christ with the powerless underdog and against the powerful establishment.

From my comfortable armchair position as a privileged, un-oppressed western liberal, I think Liberation Theology goes too far when it calls for actual revolution – I just can’t get around the fact that Jesus always eschewed that course of action. But I do believe that God is absolutely on the side of the poor, powerless, marginalised and oppressed against the powers-that-be – just that (by the same token) his methods are not those of earthly powers or power.

When I say God is on someone’s side, I don’t mean that he endorses all their beliefs or actions; and when I say he’s against another side, I don’t mean that he hates them or wants to destroy them. I don’t even mean that God is always just radical as opposed to conservative. God is far bigger than our human divisions and ideas, and won’t be co-opted by any human cause, though many have tried and still try. God alone sets the agenda and invites us to join him, or not. But I think that what God calls us to join looks far more like a revolution than it does a safe, comfortable establishment.

As Jesus’ mother Mary sang it, “God has brought down rulers from their thrones but has lifted up the humble.” Or as Jesus put it, “The last shall be first, and the first last”, and “the meek shall inherit the earth”. Jesus came to usher in an inverted kingdom which ultimately upsets the power structures, hierarchies and even meritocracies of our human world orders. The good news of Jesus is always more directly and obviously good news for those currently at the bottom of the pile than those at the top – for the last who Jesus says will one day be first. Jesus’s kingdom isn’t an earthly one, but it does turn the earthly order upside down.

Can you imagine a world in which the Putins, Trumps, Jong-Uns, magnates and tycoons cleaned the toilets of the people who currently live in the Kibera slum? That would surely be fitter justice for the mighty than any lake of fire – or any bloody human revolution. We can dream.

So how about this new liturgy for Easter Sunday:
“He is risen –
Up, civil unrest!”

3 Responses to “Up, civil unrest!” (an Easter-ish reflection)